From August 21 to August 25, Cologne was transformed into a Mecca for gamers. At Gamescom, the trade show for interactive games and entertainment, exhibitors were showcasing all novelties in the gaming sector. The latest computer and console games have been on display in the large ‘entertainment area’ . Visitors had the chance to test out the games even before their release.

Approximately 355,000 visitors came to the cathedral city in order to experience the world’s largest event for interactive entertainment live. V4Design was happily a part of the tradeshow via our partner NUROGAMES.

How many people tested the tool?

Estimation of their background

Age: an average age of 20 years

The setup consisted of a: 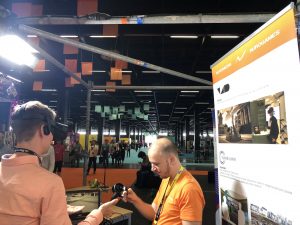